Battambang is a beautiful city in western Cambodia where I spent a few memorable days. Even though it is the third most populated city in Cambodia, it makes you feel like you’re in the countryside with its quiet and relaxing atmosphere. If you’re planning to go to Siem Reap from Phnom Penh, I really recommend you stop by Battambang for a few days.

Battambang literally means “lose the stick” or “drop the stick” in Khmer. It refers to an old local legend about a fight between a giant king and his rival during which the giant king throws a stick at his enemy but misses him. As it falls to the ground, the stick creates a huge hole that will later form a river called O Dambang. In reference to this legendary fight, Battambang first designated the spot where the stick fell and later on, the city took the same name. There’s a statue of the giant king and its famous stick at the entrance of the city.

Now that you know a little bit more about the city, let’s find out how to get there and where to spend the night. After that, I’ll tell you about my favorite spots there!

How To Get To Battambang, Cambodia?

So Battambang is accessible from Siem Reap or from Phnom Penh. The easiest way to get there is by bus or by van and you can book your tickets online on Camboticket.

How To Get To Battambang From Siem Reap

How To Get To Battambang From Phnom Penh

Where To Stay In Battambang, Cambodia? 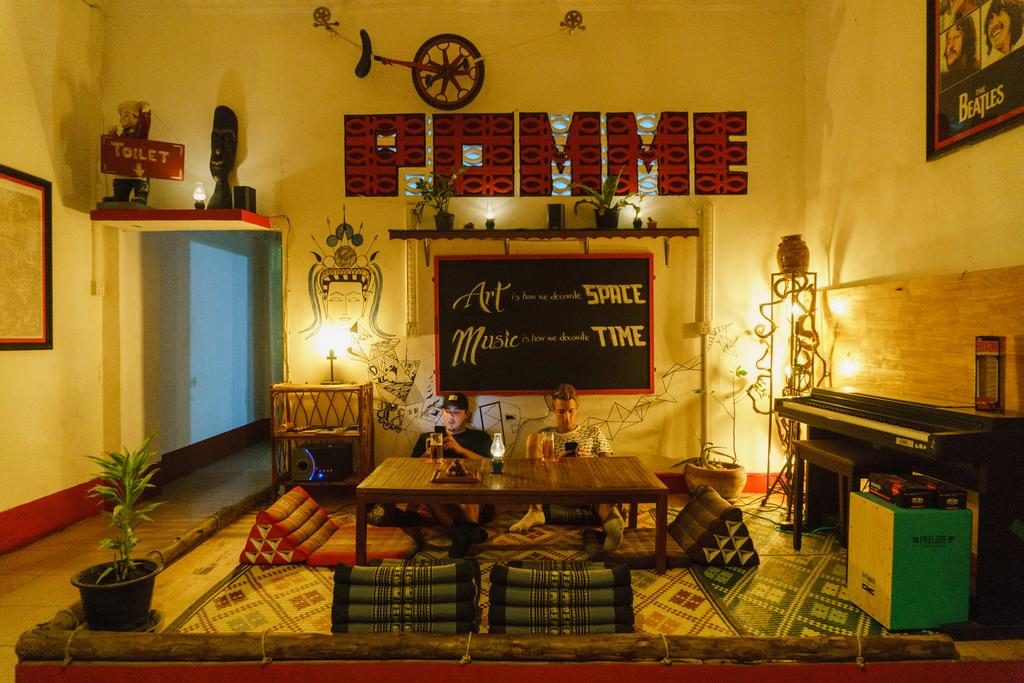 If you are looking for a friendly hostel that’s cheap and close to the main attractions of Battambang, I really recommend booking at Pomme Hostel. You’ll meet lots of people there and will find pretty much all the equipment and amenities you need for a comfortable stay. Try to book early though, Pomme Hostel is one of the most popular hostels in Battambang so rooms sold out rather quickly. 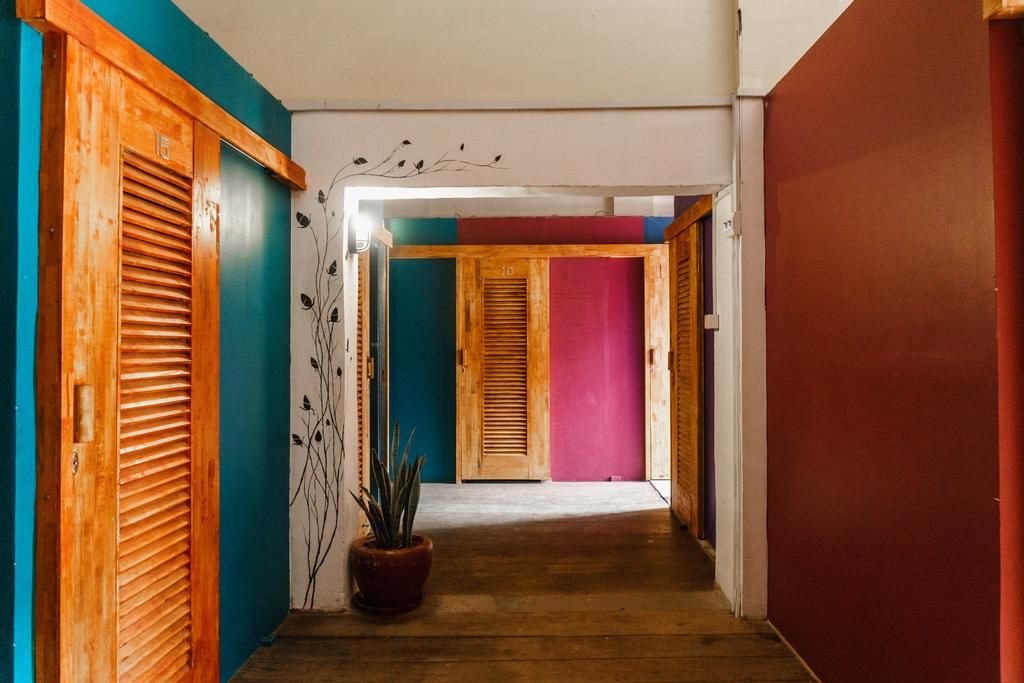 If you can afford to spend more money on accommodation, I recommend La Villa hotel, which is also located in the center of Battambang. The hotel’s architecture has a colonial style and prices are not so expensive considering all the comfort and convenience it offers. 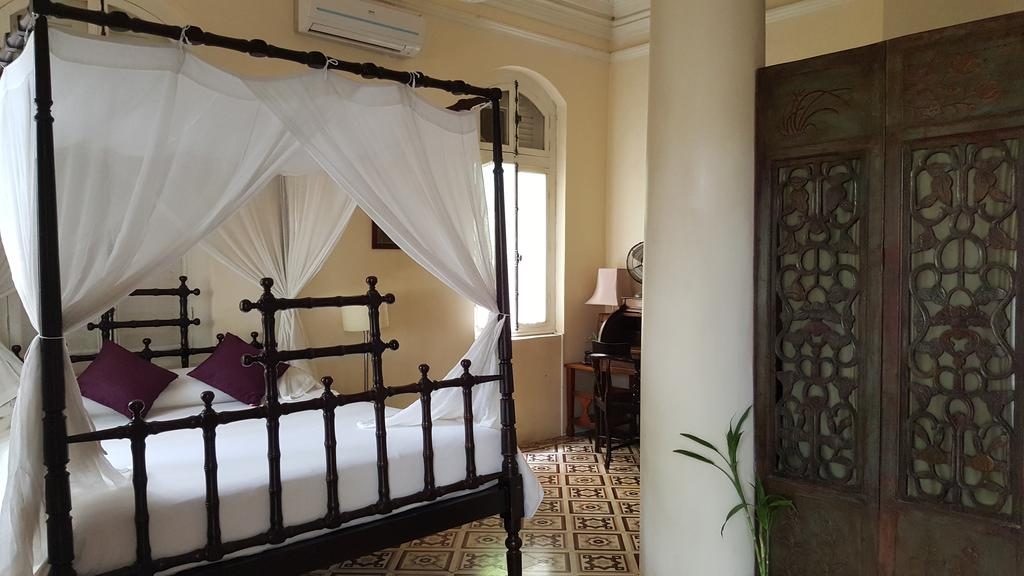 La Villa has also a great advantage and that is its swimming pool. After all, Cambodia is a rather hot country and a quick swim in the afternoon is always welcome! 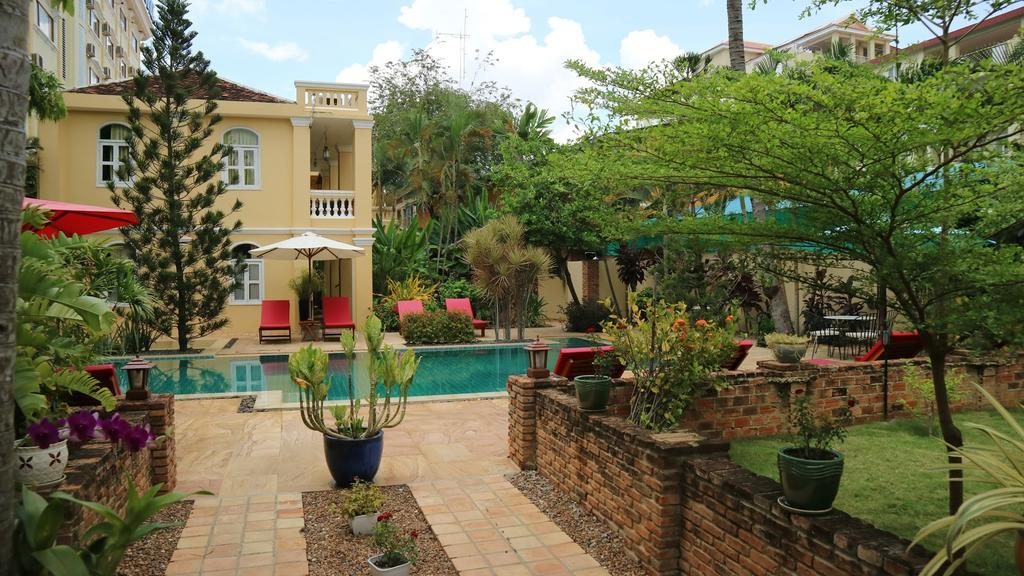 The Best Things To Do In Battambang, Cambodia

Wat Ek Phnom is a beautiful temple located about 12 km north of Battambang. It has two main areas:

1. The ruins of the ancient Hindu temple, built in the 11th century by King Suryavarman I. 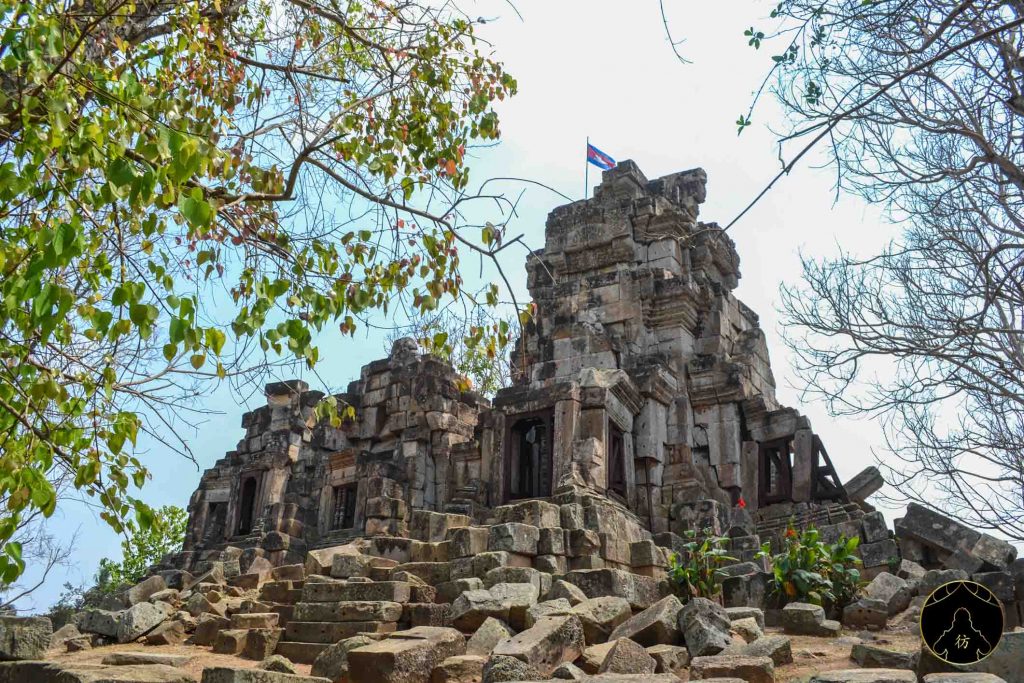 2. The recent constructions dedicated to Buddhism.

Don’t miss out on the beautiful drawings on the ceiling of the temple that illustrate the major stages of Buddha’s life.

The presence of both Hindu and Buddhist temples is recurrent in Cambodia. In fact, Hinduism has been the state religion since the 5th century and has been practiced in the country for a long time. In the 12th century, the Khmer empire converted to Buddhism and many temples have adapted to the new religion; the beautiful Angkor Wat temple in Siem Reap is one of them.

One of the most popular attractions in Battambang is the Bamboo Train. What’s that, you say? It’s actually a wooden platform with an engine, running on railway tracks. The idea came in the 1980s when the region had serious transportation problems between the surrounding countryside and the city center. In fact, people who cultivated their land needed to transport their produce to the market and children had to go to school.

Local people call them norries and that’s how these bamboo trains were created to transport both people and goods. The infrastructure has improved since then and although the locals still use the bamboo train, it has become a tourist attraction. A train ticket costs about $4.5 for a 30-minute tour through the fields of the beautiful Battambang countryside.

About 20 km south of the city, the Wat Banan temple is one of Battambang’s must-see attractions. It is a Hindu temple that dates back to the time of Angkor and was built in the 11th century by King Jarvarman. There’s a nice pond there with bungalows and hammocks if you’d like to picnic or to chill out. 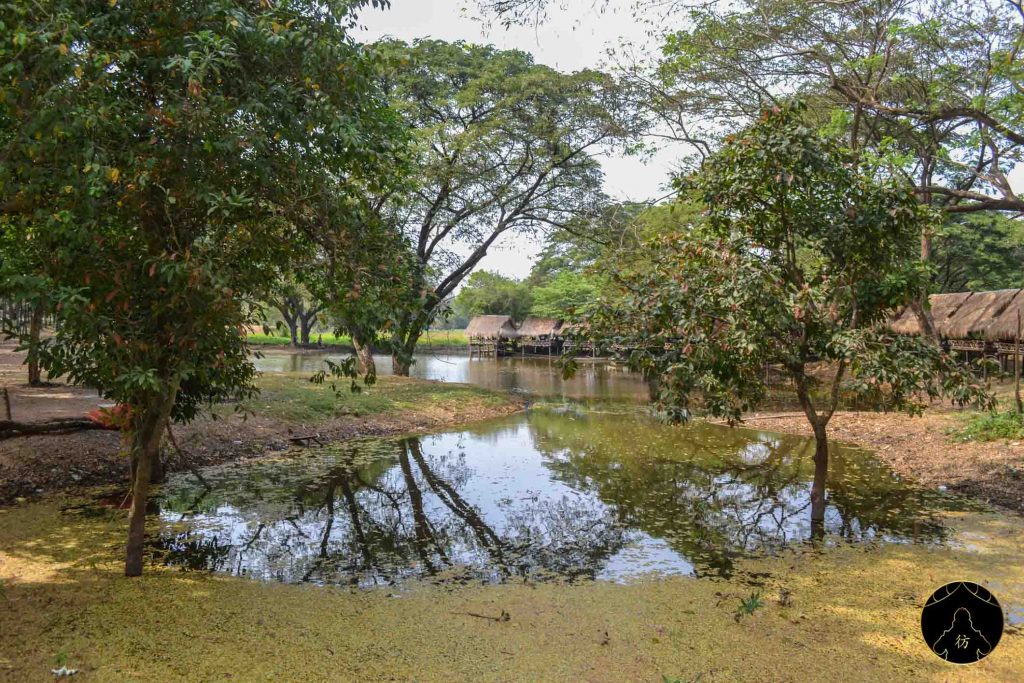 The Wat Banan temple is actually perched atop a mountain about 400 meters high. You’ll need to climb a few (I mean many) steps to reach the top. 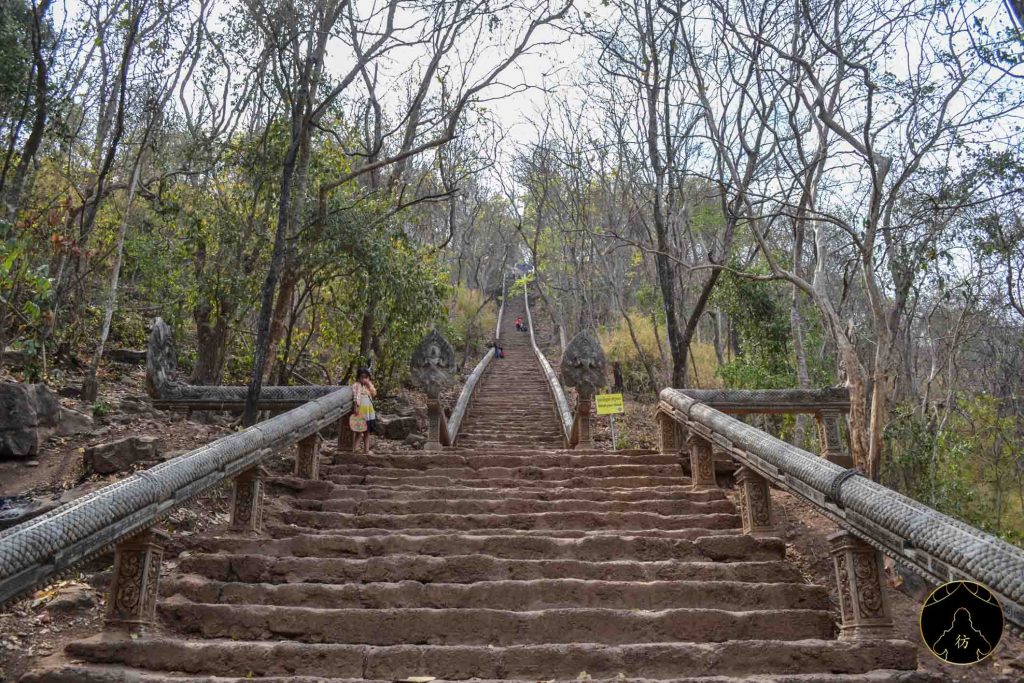 Its architecture is very similar to the temple of Angkor Wat with five stone towers forming its structure. You’ll see that the temple is in ruins because it’s very old but also because it was looted many times. It’s still a beautiful site to visit anyway, it’s steeped in history and I loved the moments I spent there. 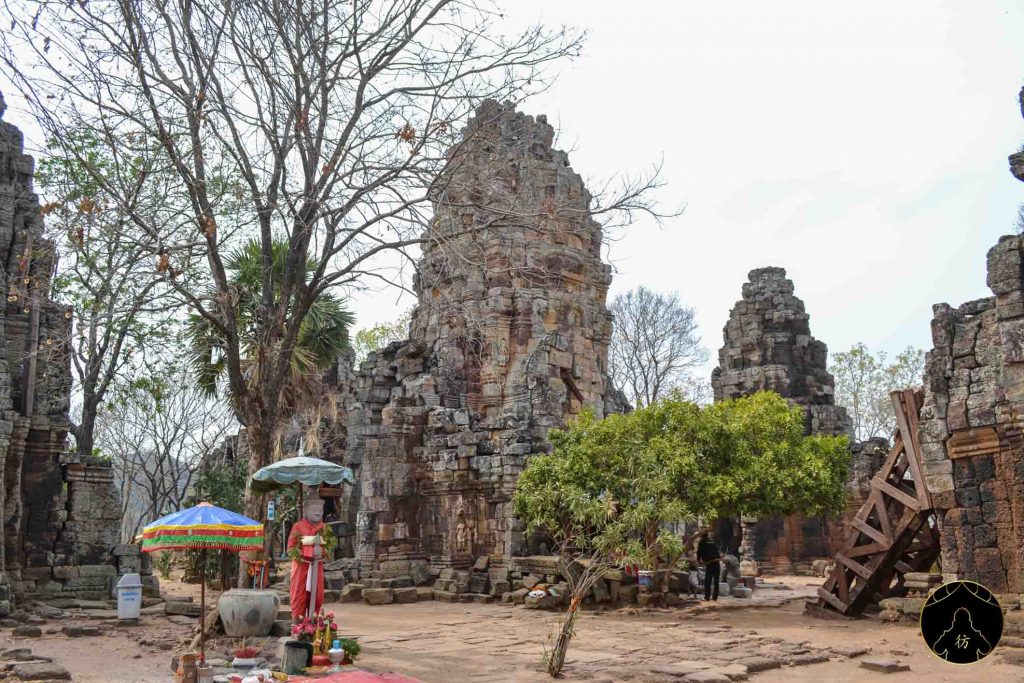 I love markets in Southeast Asia and Psar Nat is no exception. There’s a very lively atmosphere, especially in the morning, and you’ll be able to buy local products at very low prices! I loved the local mangoes and avocados. There are also restaurants and fast-food joints that sell ready-made meals. And if you happen to need clothes, you can also buy some at the Psar Nat market.

We’re still in the city center so I suggest you visit Wat Sangker. It’s a temple located on the banks of a river of the same name where you will find many Hindu and Buddhist-inspired sculptures.

Phnom Sampov and the Killing Caves

Last but not least in Battambang is this little creepy place. If you head southwest, you’ll find Phnom Sampov, a hill with a temple at its top and many caves.

Why are they so special? They are called Killing Caves because at the time of the Cambodian genocide under Pol Pot, the Khmer Rouge tortured and executed many people in these caves. There are even statues built to commemorate these atrocities. 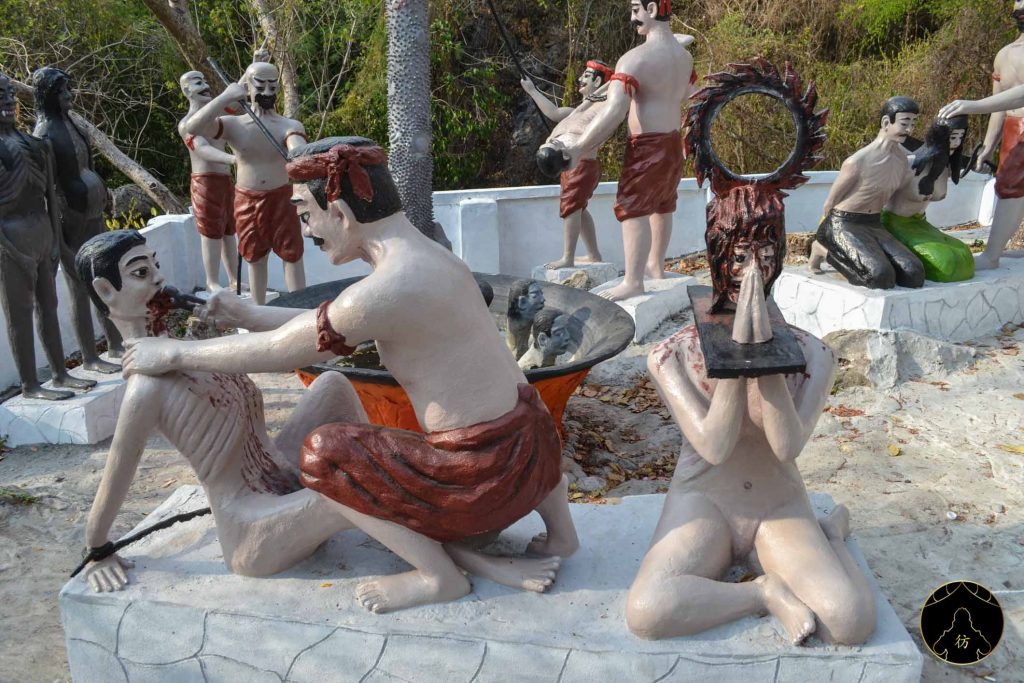 I know it’s a bit creepy but I think it’s still important to visit sites like these (also like the Killing Fields in Phnom Penh) to always remember human history’s black chapters and to make sure they never happen again. 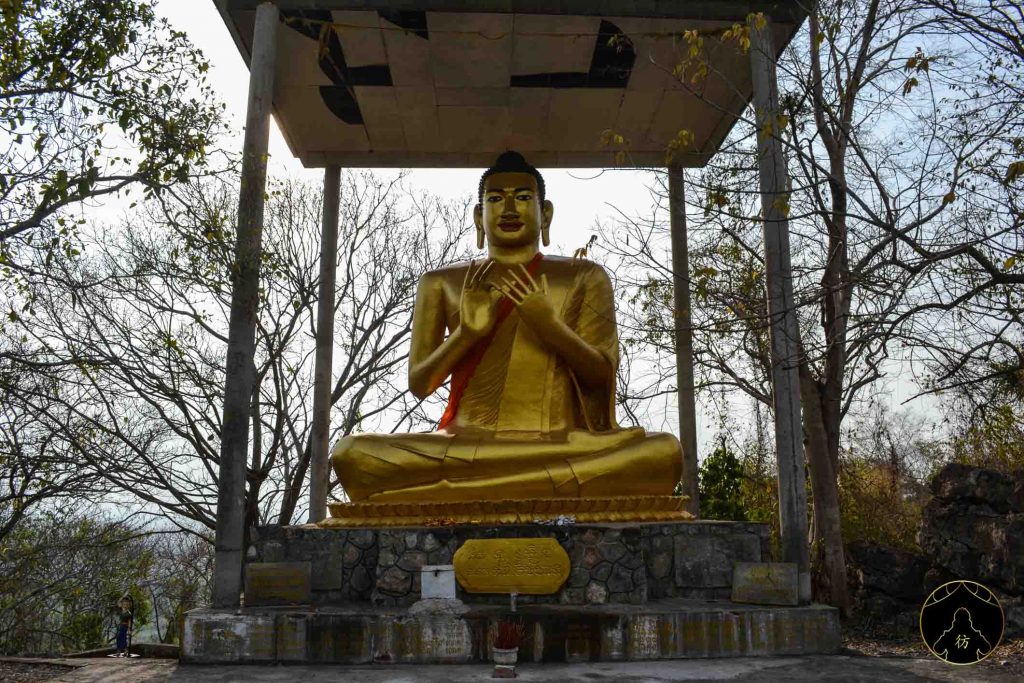 Let’s end this post on a positive note: if you pay attention, you’ll see many cute monkeys all around you. Be careful because these cheeky creatures can rummage through your stuff and steal things like your camera or you phone. 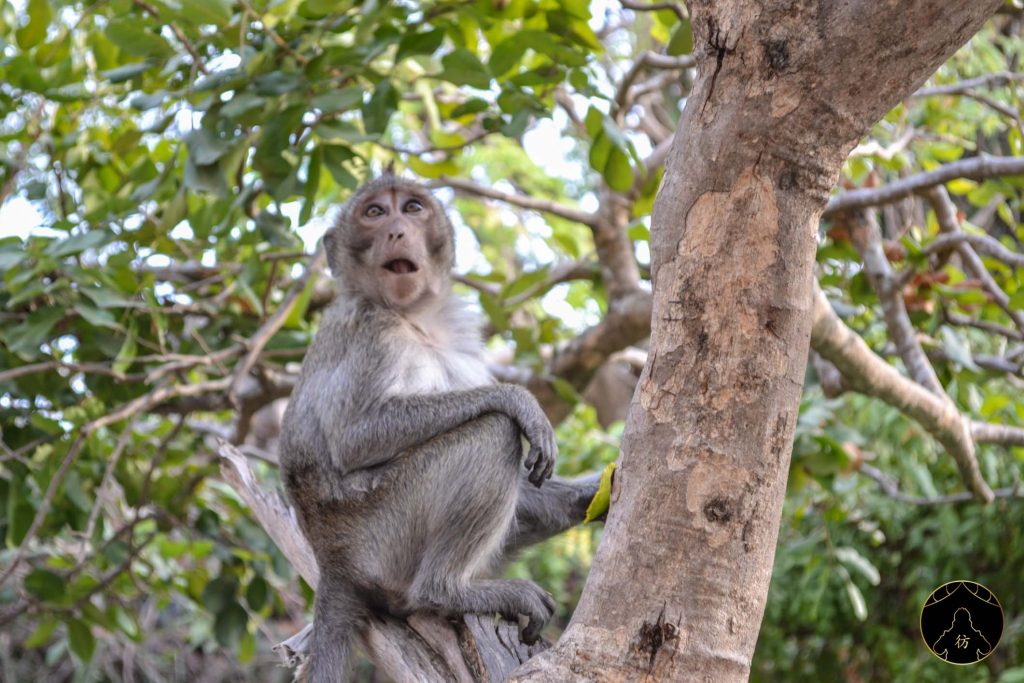 Don’t forget to enjoy the great view of the city of Battambang before going back down the hill. 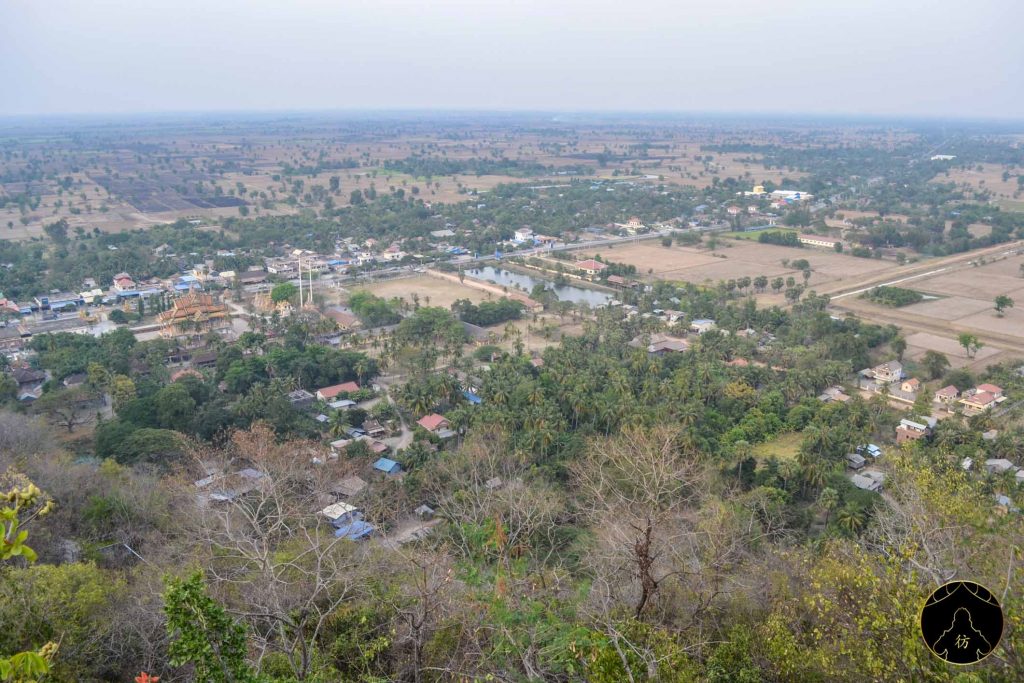 I’m done showing you around Battambang! I hope you liked this post and that it will make you consider visiting this beautiful city.