Bagan… What a mesmerizing city!

I’m sure many of you have come across pictures of the surreal Bagan plains with endless pagodas stretching as far as the eye can see, hot-air balloons flying over the ancient city and beautiful sunrises illuminating everything. It looked so aesthetically pleasing in pictures that I wondered if it would be just as mind-blowing in real life. It definitely was. Let me first tell you how you can travel to Bagan and where you can stay before getting into more details.

How To Get To Bagan, Myanmar

There’s a tiny airport in Nyaung U near Bagan so you can travel by plane from Yangon or Mandalay to Bagan. There more regular flights from Yangon than from Mandalay though.

This is the alternative I went for and I really recommend it. I took a minibus from Monywa because it was cheaper and relatively comfortable.

You can take a train to Bagan but I wouldn’t recommend it. Myanmar’s railway network is worn out to say the least so train rides last ages sometimes. It’ll take 18 hours to get to Bagan from Yangon for example, and train ticket prices are not really cheaper than bus tickets for that matter.

The only nice thing about train trips is that you get to enjoy the landscape. The authenticity of the experience deserves mention so if you absolutely want to take a train -any train- in Myanmar, make it a short trip, from Kalaw to Nyaungshwe  for example. I tried it, it was a three-hour ride and it was nice! But it was only three hours, I’m not sure 18 hours would have been that nice.

Where To Stay In Bagan, Myanmar

For your information, all the temples and pagodas are in Old Bagan and you cannot stay or spend the night there. You can either stay in Nyaung U, east of Bagan, or in New Bagan, which is located more towards the south.

Having been in both cities, I really recommend New Bagan because it’s closer to Old Bagan and therefore to the temple plains, and because it’s a livelier city. It’s more like a tourist village but it’s a village where you can easily find restaurants to eat and where to rent bikes or motorcycles.

If you’re planning to stay in New Bagan, I recommend you book your room as soon as you can because the best hotels are often fully booked sooner than you think, especially during high season. I stayed in this hotel; it wasn’t expensive, was relatively well-sited and offered accommodation in a very beautiful setting. If you’ve got more money to spend, you can stay at the Bagan Aureum Palace Hotel, an absolutely amazing resort located at the very heart of the Bagan plains. Can you imagine the breathtaking scenery surrounding the hotel? It’s particularly suitable for families because you can rent an entire villa there! And it’ll be worth every penny. 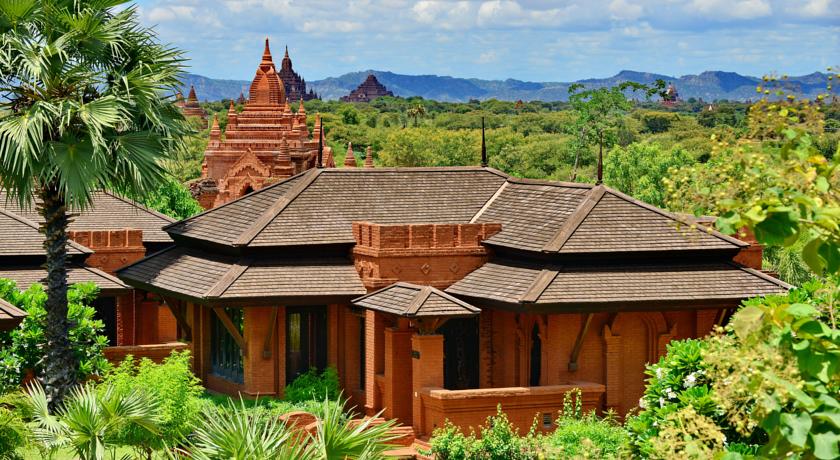 Along with the Angkor Wat, Bagan is one of the biggest archaeological sites in Southeast Asia. It’s an open-sky museum if you ask me. From the 9th to the 13th century, Bagan had been the capital of the first Burmese Empire, The Kingdom of Pagan.

Anawrahta was certaintly one of Bagan’s most distinguished rulers. Converted to Theravada Buddhism by a monk named Shin Arahan, he took it upon himself to spread Buddhism throughout the Kingdom by launching a vast construction program to build Buddhist temples and pagodas.

Anawrahta’s successive kings significantly expanded the Kingdom’s territory, reaching what would nowadays be Thai frontiers. The Mongols’ invasion, lead by Kubilay Khan, marked the Kingdom’s decline in the 13th century.

The Best Things To Do In Bagan, Myanmar

Before Visiting The Temples

You can hurry and visit Bagan’s temples but you can also take the time to visit New Bagan and walk along its tiny streets where many artisan shops sell nice little souvenirs. Have a look at the Bagan House workshop below!

Take a sneak peek at what they do:

You’ll probably need a set of wheels to wander around New Bagan so either go for a bike or a motorcycle. I rented a motorbike for about $7 a day (which is next to nothing by the way) for a quick city tour.

Keep in mind that all motorbikes in Bagan are powered by electricity, a measure implemented in an effort to reduce air pollution due to fuel combustion from ordinary vehicles. It doesn’t mean you won’t come across any gas motorbikes, but those are used exclusively by local people.

Electric motorbikes in Bagan are not the most powerful you will ever drive so don’t expect to race around the city in the blink of an eye. They’re powerful enough to get you anywhere in Bagan but be careful not to slip on sandy tracks. My motorbike slipped a lot and the best way to avoid that for me was to get off it and walk until the road wasn’t sandy anymore.

Let me now share with you my six favorite spots in Bagan’s historical site but if there’s something I cannot stress enough, it’s the fact that your thirst for adventure and for the unknown is what’s going to make of your journey an unforgettable memory. Bagan is indeed a very mysterious city and the best way to dive into its mystery is to let yourself wander anywhere and everywhere your instinct tells you to. Here’s a tip to never get lost during your trip.

By the way, temple climbing has been banned by the local government, except for the five following pagodas: Pyathatgyi, Shwesandaw, South Guni, North Guni and Thitsar Wadi. Please be respectful of this and try not to damage anything wherever you go. I actually saw a tourist take away an entire brick from a temple in a bag. As tourists, we can be more respectful and responsible than that, can’t we? Let’s keep in mind that these temples have been and will always be considered sacred for the local people of Myanmar.

You have to pay $5 to get inside this sumptuous building but if you’re not interested in entering, you can enjoy the museum’s architectural Khmer design from outside. It’s worth it!

If you’ve already been to Yangon, you’d probably think you’ve seen this pagoda before and you’d be right. It’s very similar to the Shwedagon Pagoda in Yangon. Spectacular! It’s one of the biggest buildings of Bagan. Lost somewhere in the greenery, it is seldom visited but a must-see nonetheless! Catching the Sun in Mingalar Zedi

The best sunrise pictures I keep from Bagan were shot from this spot. I remember back in 2017, climbing this pagoda was allowed during my stay in Myanmar. Shake off all that laziness as much as you can and go watch the sun rise on the plains of Bagan. It’s a sight that deserves more than just waking up earlier than usual. 😉

As you can see, there are dozens of hot air balloon flying over Bagan every morning. I tried that activity in Inle lake and it was an amazing experience but I bet it’s even better in Bagan. You can book your hot air balloon online here.

The Tayoke Pyay is a beautiful pink-ochre temple. There are amazing wall drawings inside in case you’re interested! This beautiful temple has recently been renovated. There’s a tiny market at its entry now. Let me remind you to keep this list only as a reference and leave enough room for adventure and surprises throughout your journey. There are great places to discover all over Bagan so keep your eyes wide open!

I hope this post got you a tiny bit closer to this amazing city and I hope it helps you plan your next trip to Myanmar. Please post your questions and comments down below and share this post with your friends too!

PS: To visit more fabulous places in the area, check out this article too: Best places to visit in Southeast Asia.

Mandalay Myanmar – All You Need To Know Before Your Trip