Takayama Japan – Takayama literally means ‘high mountain’, and if you have the opportunity to visit the city, you’ll easily understand why people call it Takayama. It is located in the beautiful mountainous region of the Japanese Alps and is surrounded by gorgeous mountains that reach up to 3000 meters in height. The city itself is built on high mountains, 570 meters above sea level to be precise, and its cool climate is there to prove it. Takayama is located in Gifu Prefecture, which has quickly become one of my favorite prefectures.

Takayama is also an exciting historic city with a rich culture and beautiful old Japanese temples. It’s called the little Kyoto for a reason! Higashiyama is one of the city’s best preserved historic districts; visiting it was a really great experience and remains one of the best I had in Japan.

Let’s go over the necessary traveling and accommodation information before going through the top 10 best attractions of the city.

How To Get To Takayama, Japan

Like it’s usually the case almost all over Japan, the most convenient way to travel around is by train. Not just any train, the bullet train! The Shinkansen is indeed your best option to get to Takayama. You will stop by Nagoya first then you’ll need to take a local train line.

Here is an example of a route you can follow from Tokyo. Like I said, the Shinkansen will first get to Nagoya, which takes about an hour and a half. Then you can take the local Hida 11 line that’ll get you to Takayama after a two-hour trip. A one-way ticket costs 14,700 yen which is about $130. This route has only JR lines so you use your JR Pass if you have one.

Where To Stay In Takayama, Japan

If you are on a budget, I strongly recommend the J-Hoppers Hida Takayama hostel. It is very cheap and costs around 2,000 yen per night, which is about $18. The hostel is clean, relatively comfortable and is conveniently located in the city center, 5 minutes away from the train station.

Among other advantages, the J-Hoppers hostel offers trips to Shirakawago at unbeatable prices. Customers of the hostel can buy the tour at only 3900 yen ($35), which is even cheaper than if they took a local bus. 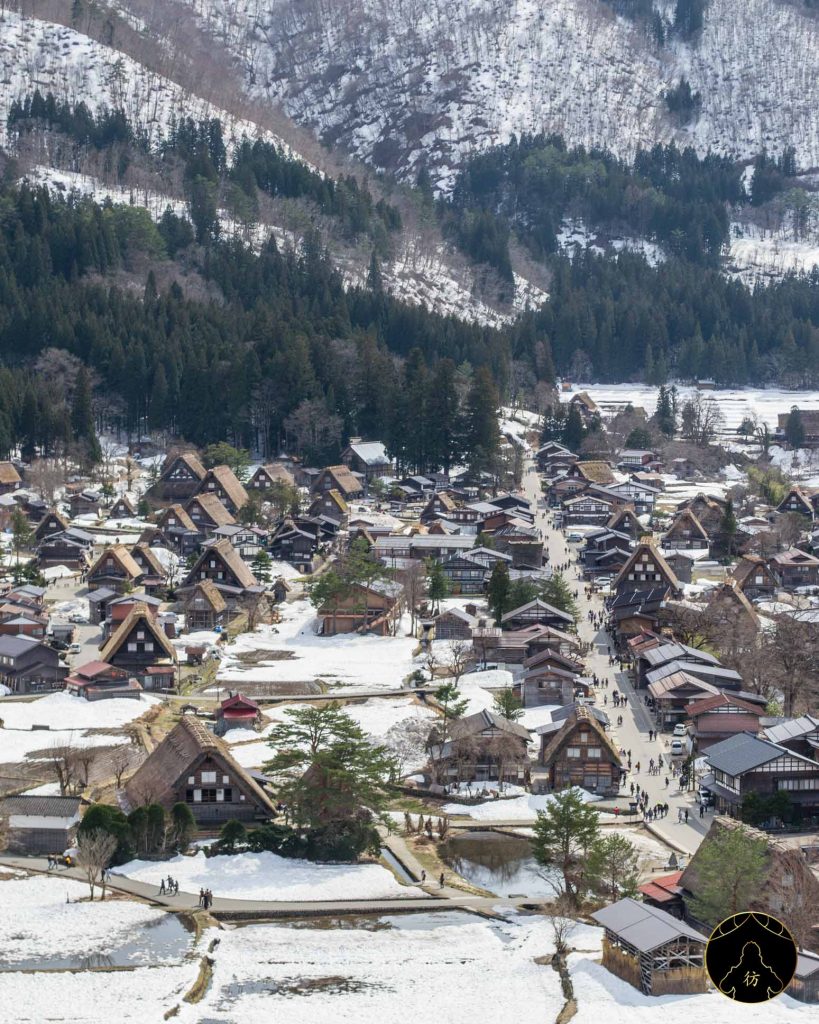 If you’re looking for more authentic Japanese accommodation, you can go for one of the city’s ryokan. One of the best is the Ryokan Tanabe, which is conveniently located in the city center yet has a beautiful and very traditional setting.

Ryokan Tanabe also offers a great onsen and with Takayama’s cool climate, there’s nothing better than a nice, hot bath at the end of the day to relax and enjoy yourself. For more ryokan option in Takayama, feel free to check out this article: Ryokan Takayama.

You can also spend the night in a Buddhist temple if you want to take the traditional Japanese experience to the next level. The Zenko-ji temple offers accommodation services to everyone who’d like to sleep in the temple on tatami mats and futons, like a real Buddhist monk! You can also pray there and even try your hand at Japanese calligraphy.

By the way, if you want to stay in other temples in Japan, read this blog post: Shukubo Temple Lodging Japan.

The 10 Best Things To Do In Takayama, Japan

Now that you have all the necessary information to plan your trip to Takayama, let’s jump right into this top 10 of places I’ve visited!

Our visit of Takayama starts with a charming traditional village located on the outskirts of the city.

The Folk Village of Hida

Hida folk village is located about a mile west of the city center of Takayama. To get there, you can take the Sarubobo bus from the city station. The trip lasts 10 minutes and costs 210 yen ( around $1.9). Two buses leave the station per hour (one every clock hour and another one forty minutes later) every day between 9AM and 5PM (schedules available here). I recommend you take a bus trip and walk the remaining distance to discover the area and visit the next two places I’m going to tell you about.

If you’re noticing the name ‘Hida’ pretty much everywhere in Takayama and wondering what it means, it’s actually the name of the former province of which Takayama was the capital. A whole culture had developed in the north of the current Gifu Prefecture and it is still very specific to that particular region. Therefore, Hida refers to the northern part of Gifu, and has particular traditions but is not considered to be a prefecture per se, not at the administrative level, that is.

It goes without saying that visiting the folk village of Hida is the best way to discover what its culture is all about. Let me tell you, you will be amazed from the outset at the panoramic view of the entire village. It’s literally an open-air museum! 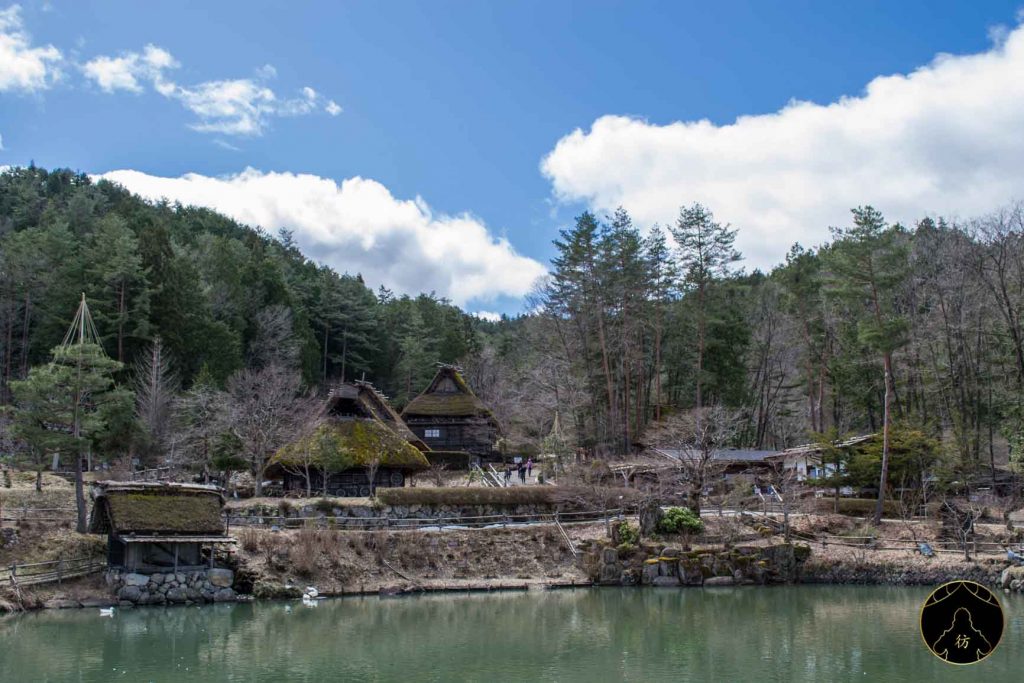 You may have noticed that the roofs of the houses are made of thatch. It’s a style of architecture called Gassho, and it is also used in the nearby village of Shirakawago.

You can visit most of the houses in the village so you will have a better idea of the lifestyle of the inhabitants and the farmers of this beautiful mountainous region. That’s all I’m giving away for now, you’d have to visit it to enjoy it! 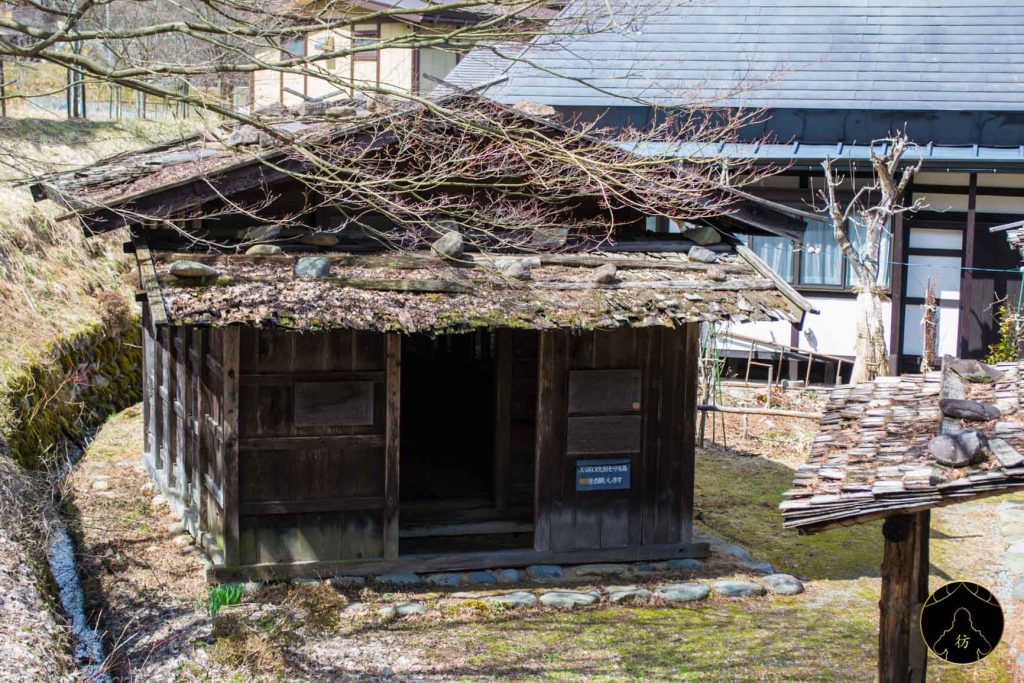 If you walk down the hills of the folk village of Hida to downtown Takayama, you will find an abandoned house called Nukubi. Much like in the village of Hida, you can visit the house and see where and how the local farmers lived at the time. You will also find a stable and many other interesting rooms. Entrance to the house is free and there’s usually almost no tourists around.

At the western edge of Takayama city, you will find the stunning Hidatoshogu temple that I bumped into by sheer coincidence as I was walking from Hida’s village to the city center. This place is still not a tourist attraction so to speak and to be honest, I’m glad it’s not! You will find beautiful temples there, a charming red bridge and a great torii like you’d find in all Shinto shrines in Japan. 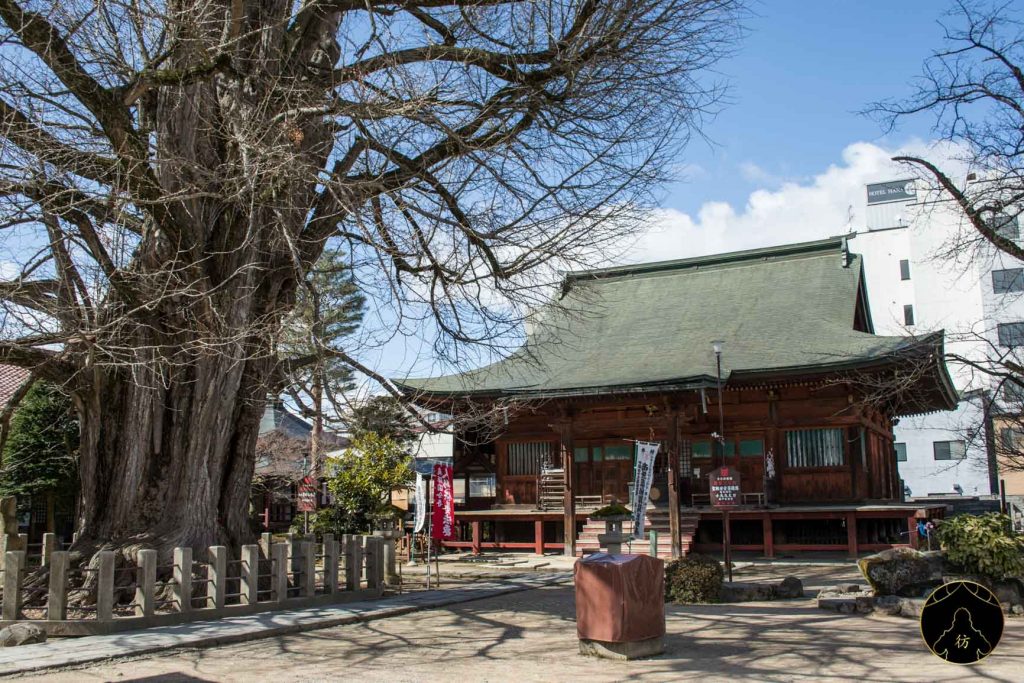 We are now in the city of Takayama to visit the beautiful Hida Kokubunji temple that has a magnificent 5-storied wooden pagoda.

You will be welcomed at the temple’s entrance by the region’s mascot, Sarubobo! In the local dialect, sarubobo means ‘baby monkey’ and it’s actually an amulet that is usually made by grandmothers as a gift to their little girls to bring them luck in love. The original sarubobo are red but there are many variants available in all colors today.

Miyagawa Market is also one of my favorite places in Takayama. It is only open in the morning and you will find absolutely everything there. You can buy fruits and vegetables there but can also try local dishes or buy souvenirs. The setting of the market is also great because it is located along the Miyagawa River (hence the name).

Takayama Jinya is the former seat of the Jinya government that dates back to the medieval period of Japan, known as the Edo period. It was the seat of power of the entire Hida region and even after the Meiji Restoration, the building was transformed into the Gifu Prefecture’s administrative center, thus maintaining a strong influence over the region. It is only recently, in 1969 to be precise, that the building was made into a museum.

At the Takayama Jinya exit, don’t miss out on the beautiful red bridge of the city:

We’re now at the old town of Takayama, on the very charming pedestrian street of Sanmachi Suji. It’s like being on the streets of Gion in Kyoto, isn’t it? 🙂 You will find many shops there that sell the local specialties. You can even taste some sake for free and get yourself a bottle of it as a souvenir.

The Museum of History and Art

If you’re still hungry for more cultural tourism after Takayama Jinya, you can also visit the city’s Museum of History and Art. Entrance is free, and you can enjoy the numerous historical works and crafts of the Hida region.

You’ll also find an interesting miniature reconstruction of the floats used for the Takayama festivals. Pictures down below! 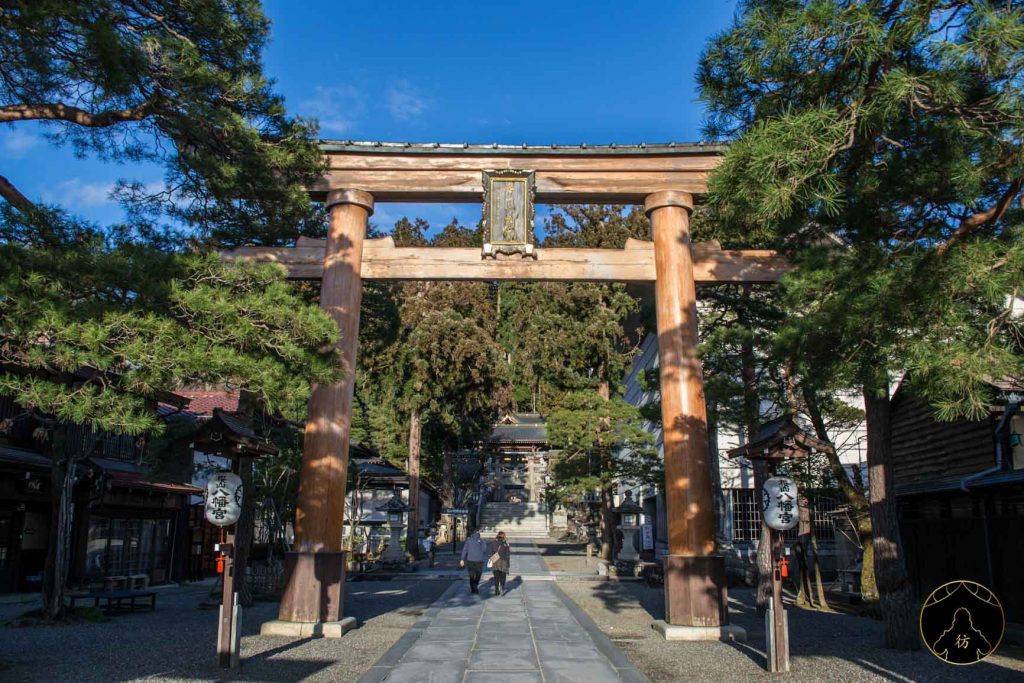 The Sakurayama Hachimangu sanctuary is located in the northeast and is a must-see attraction in Takayama. There’s an impressive wooden torii at the entrance of the sanctuary, the origins of which date back to the 5th century, when the Emperor Nintoku asked his son to kill Ryoumen Sukuna, a monster with two heads, four arms and four legs.

The brave prince built the Sakurayama Hachimangu sanctuary to bring him good luck and thus emerged victorious from his fight against the monster. In 1683, Lord Kanamori decided to carry out major expansion and rebuilding work, making of the sanctuary what it looks like today.

As I said earlier, the floats used in the famous Takayama festivals (Sanno Matsuri in spring and Hachiman Matsuri in autumn) are on display in the sanctuary. These floats, called yatai, parade through the streets of the city during the festivals, much to the delight of the public. Apparently, there are also professional puppeteers who perform puppet shows on the floats. I’m not sure about you but I’d love to see this some day! 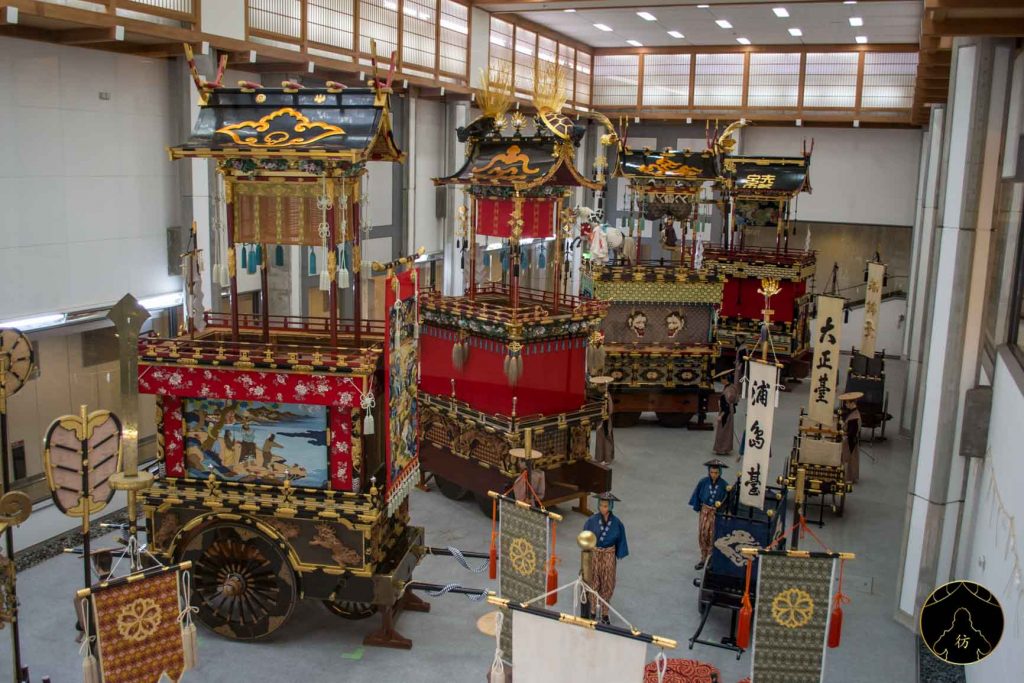 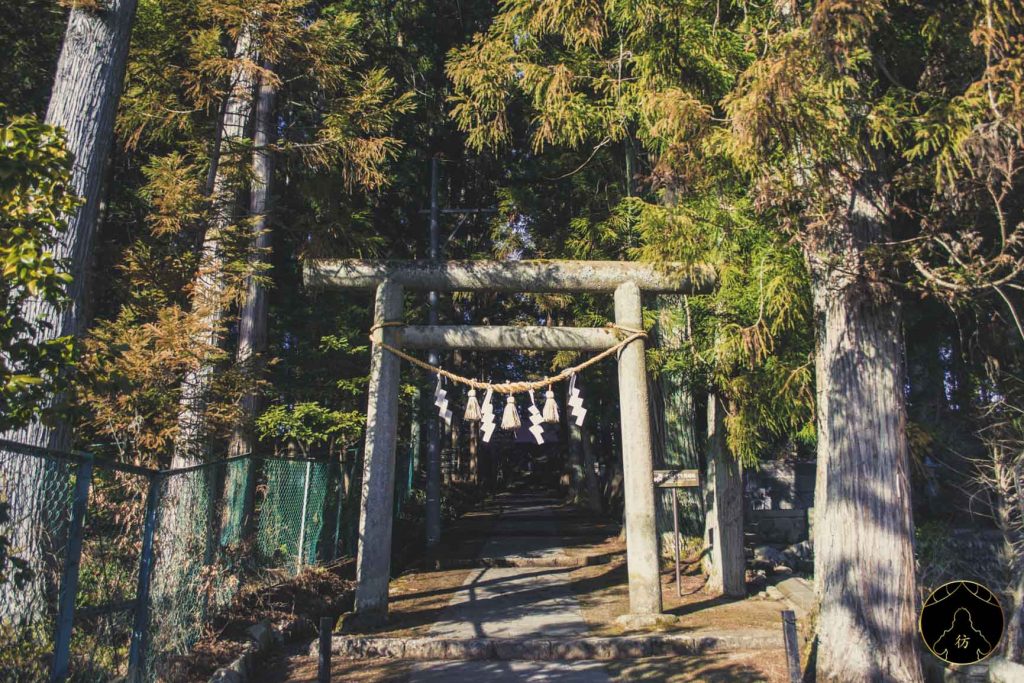 Last but not least is probably the most beautiful place in all of Takayama, the town of Higashiyama. This area of the city is located to the east and was built around the former Takayama Castle, the ruins of which can now be found in Shiroyama Park. It is not just a temple or two but no less than 13 temples and sanctuaries that were built on the city hills.

It is really a magical place and I really recommend you devote at least half a day to visit these temples. One of my favorites is the Higashiyama Shinmei Sanctuary; I really like it because it is located in the middle of a forest.

Our visit to the beautiful city of Takayama is over. My trip to this region was really extraordinary and I really recommend you try it too; it’s quite different from common tourist destinations in Japan.

Have a good trip!